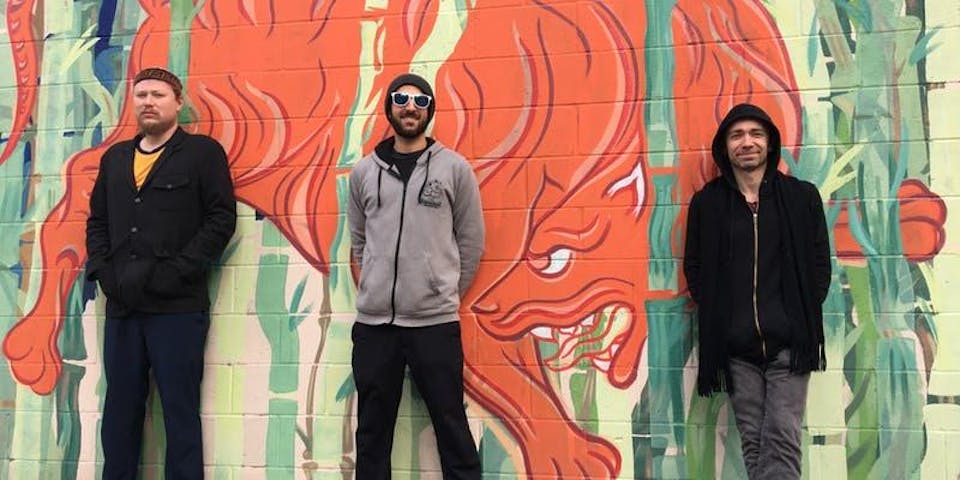 Sci-fi fusion trio Consider the Source defy easy categorization. If intergalactic energy beings, upon their initiation into an order of whirling dervishes, built a pan-dimensional booty-shaking engine powered by psychedelic math…it would sound like a cut-rate CTS cover band. With their blend of progressive rock and improvisatory jazz, soaked in Indian and Middle Eastern styles, CTS blends disparate elements into an utterly original whole. A relentless touring schedule has earned them a fervent following around the world, with fans ranging from jam-band hippies to corpse-painted headbangers.

Their latest album, You Are Literally a Metaphor, is the culmination of a fifteen-year musical journey. Packed with the same fury and dazzling virtuosity of their previous work, Metaphor is also a portrait of three musicians reaching new levels of maturity.

From the bluesy swing of “When You’ve Loved and Lost Like Frankie Has” to the ethereal electro-synths of “Sketches From a Blind Man”, CTS’s minimalist pop instincts stand shoulder-to-shoulder with progressive metal and freewheeling improvisation in a true expression of their omnivorous musicality. Three of Metaphor’s nine songs are Eastern European traditionals, but could easily be mistaken for the band’s original tunes, so singular has their sound become. CTS retain their signature fiery maximalism while pushing the hooky, anthemic songwriting to the forefront. Bassist John Ferrara’s new Taurus bass pedals and guitarist Gabriel Marin’s new custom Vigier double-neck guitar add new dimensions to the band’s already diverse sound.

This is an album born of comfort and growth. In the five years since World War Trio, the band has toured extensively, Marin and Ferrara have released side projects, and drummer/percussionist Jeff Mann has gone from a relative newcomer to a road-hardened veteran. After all this time, CTS knows how to create space for each other, how to finish each other’s musical thoughts and sentences, how to think as three individuals but speak with one voice. You Are Literally a Metaphor is a statement of confidence, an assertion of identity from a band with no reservations and nothing to prove.

CTS have performed in a half-dozen countries across three continents. They have shared the stage with a wide variety of artists, including: Victor Wooten, King Crimson Projekt, Wyclef Jean, Ozric Tentacles, Soulive, The Disco Biscuits, Papadosio, Turkuaz, Pigeons Playing Ping Pong, Wayne Krantz and many others. They have performed at festivals and events including: Electric Forest, Peach Fest, Gathering of the Vibes, Resonance, Summercamp, Shakori Hills, ProgDay, and Progtober. You Are Literally a Metaphor is available at

BioGypsy Temple’s lyrics are steeped in a youth driven understanding of the human struggle and the inevitable revelations that come from that struggle. Gypsy Temple’s leader Cameron Miles Lavi-Jones is first and foremost a highly charged storyteller and showman. The band pulls its sound from alt rock to progressive rock to jazz to soul and even classical music. What sets Gypsy Temple apart from the usual 4-5 piece bass, drums, guitar rock band is the integration of cello and a full horn section, The Horny Tones, led by Evan Lorbecki, both of which are mainstays in the group and key to the band’s alt rock with a twist sound.

The last year has been a wild ride for Gypsy Temple. They just finished recording their debut album entitled King Young Blood on Very Juicy Records working at both the Red Room Studio and Robert Lang Studios. Thanks to their UpStream showcase last year and with an enthusiastic introduction from Cameron’s mentor and friend, Ayron Jones, who uses the same firm, Gypsy Temple was picked up by XO Publicity, a professional PR firm, pointed to handle the marketing and promotion of this band of brothers’ new album.

Gypsy Temple is steadily gaining ground with numerous shows at The Nectar Lounge, Neumos, The Columbia City Theater and more. Social media stats are up 1000 percent from last year. This fall, Cameron started hosting a talk show called Real Talk on UW’s radio station – Rainy Dog Radio that keeps him highly visible with artists and industry professionals. The band’s rigorous House Show schedule builds Gypsy Temple on the college radar. Gypsy Temple has been touring the region incessantly, posting religiously on social media and building their fan base of the underground faithful in anticipation of the new album.

Portland, Oregon’s Lost Ox has been unleashing funky shred rock on the public since early 2017. Their debut album, Wildheart, proved to be a hit amongst their hometown fans and led to shows getting busier while the venues got larger. Shortly after the album’s release, they were co-headlining the 500-seat Star Theater and heading out on tour across the western US. Now, Lost Ox finds themselves field-tested and battle-ready, prepared to lay down a fury of shreddy psychedelia upon the no longer unsuspecting public.

In the short time that Lost Ox has been spreading their uniquely progressive brand of outlaw funk & americana across the west, they’ve recorded an album (Wildheart), packed venues throughout Portland, and expanded all along the west coast, extending east past the Rocky Mountains. Characterized by intriguing lyrical interplay, shredding guitar solos, funky bass lines, and complex arrangements, Lost Ox is taking yesterday’s music and rebranding it with originality that is ripe for the future.