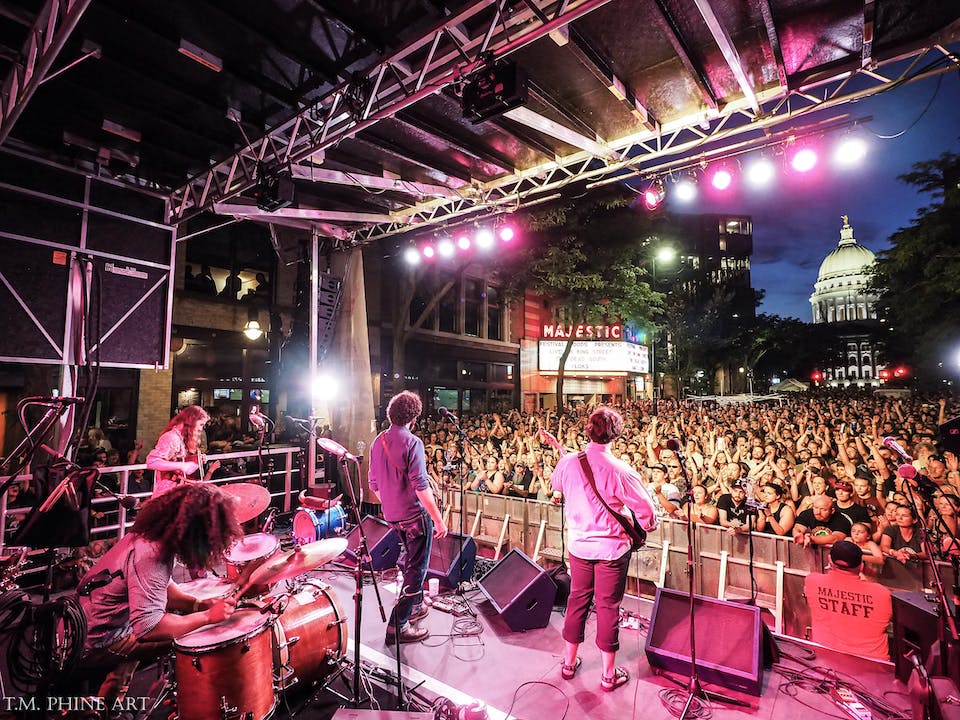 iCal
Google
This is the kind of Americana that makes you shake your rump! Don't miss it, tickets onsale now!

Far Out West is a quartet from Portland, OR that blends rock, funk, and Americana into seamless and poignant instrumental improvisations to create a one-of-a-kind sound. Their uplifting original songs feature powerful vocals and strong arrangements, giving their jams a solid platform from which to launch and evolve.

Starting in 2015 from a front porch in the college town of Stevens Point, Wisconsin. Armchair Boogie can be defined by their pickin’ skills and infectious grooves. Augie Dougherty (banjo, vocals) and Ben Majeska (guitar, vocals) began playing under the name before becoming complete with the addition of Eli Frieders (bass) and solidification of Denzel Connor (drums) as the driving rhythm section behind a bluegrass, up-tempo, jammin-funkgrass outfit.

In the spring of 2018 Armchair Boogie moved to Madison, WI and released their first album. During this time they began touring around Wisconsin, the Midwest, and across America. Their journeys on the road have led them to stages such as Blue Ox, Northwest String Summit, John Hartford Memorial Festival, Summer Camp, and Live on King Street. They’ve had the honor to share the stage with The Infamous Stringdusters, Horseshoes and Hand Grenades, The Dead South, Kitchen Dwellers, Pert Near Sandstone, Trout Steak Revival, and have jammed with many more.

With the help of a loving and dedicated following, the group was able to successfully crowdfund their album, “What Does Time Care?", which was released on October 11, 2019.

Be warned: if you’re looking to listen to the Boogie Boys, drink some water, eat a banana, do some stretches, and be ready to boogie the night away.

Todd and the Toots is a Seattle based acoustic reggae and soul group. Our music is played on acoustic instruments; Guitar, mandolin, upright bass, percussion and drums with rich vocal harmonies. All members of the band play in local bluegrass groups, and while this may influences our sound in some small way, there is nothing about the music that you would call bluegrass. As Brogan likes to say... "It's baby making music"

The group formed in 2016 at the annual Gray family summer party we call Toddgrass. Brogan arrived wearing a Toots and the Maytals t-shirt and Todd exclaimed "I love Toots and the Maytals!". A few hours later the group was on stage, performing a handful of Toots songs they had worked up, and from that day forward we've been playing reggae together with big smiles on our faces. Todd likes to refer to Toots Hibbert as the "James Brown" of Jamaica so the band invited Rob Jones to bring his soul singing into the mix and really give it that "Toots" feel.

We pride ourselves in putting the fun into our shows with great music and great danceable acoustic reggae. Join our mailing list to find out where we'll be playing next!